The team at Keyfix have created technical guidance to answer your most frequently asked questions. Find all the answers you’ll need below.

What is the function of a Cavity Tray?

A Cavity Tray is required over all bridges or penetrations of the cavity within an external wall.

Its primary function is to capture moisture running down the internal surface of the external skin of masonry, and moisture dripping off wall ties within the nominal 50mm 'clear cavity'.

Once captured, this moisture must be restricted from travelling horizontally along the length of the tray and instead must be expelled out of the cavity via weep vents placed at specified centres.

It is therefore essential that the Cavity Tray is continuous across the 'clear cavity' to ensure that all moisture captured is directed outwards and not obstructed by mortar droppings, creating a route inwards which could in turn saturate insulation etc.

Furthermore, it is important to ensure the horizontal section of a Cavity Tray is continuous and does not have any perforations which could redirect the captured moisture inwards. It is also essential that a tray has no perforations in order to prevent rising damp. 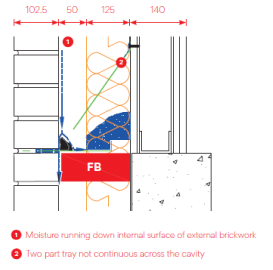 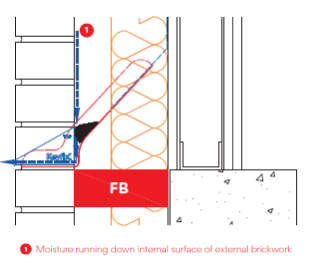 Can one Non-combustible Cavity Tray be installed over several items within the cavity?

It is acceptable to protect more than one element i.e. fire barrier & masonry support, with a single Non-combustible Cavity Tray, provided the lowest item requiring protection is located within a maximum vertical height of 225mm from the Cavity Tray.

A NCCT should be installed as close as possible to the item it is protecting.

The logic behind this dimension is driven by brickwork bonds. If a soldier course was to be built over the item to be protected, the closest measurement the NCCT can be installed is 225mm.

Details which are outside of the above should be given additional consideration in relation to the area of masonry above, in order to assess exposure to moisture volumes and mortar droppings etc. 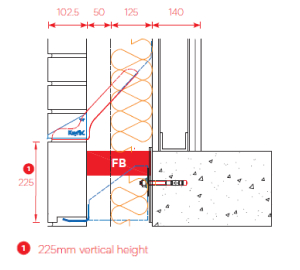 Does a Cavity Tray need to be fixed to, or supported by the internal skin?

This in turn eliminates issues such as Thermal Bridging and Differential Movement which have been identified by Warranty Providers as an area of concern for metal cavity tray systems which are fixed to the internal skin. Cavity Tray systems which do not require support from the internal skin are known to be substantially easier and less expensive to install, whilst reducing interferences as a result of deviations in cavity width due to construction tolerances. 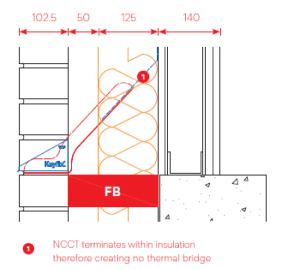 Is a Non-combustible Cavity Tray required between two skins of masonry just above ground level?

Cavity Trays when built between two skins of masonry are exempt from the updated Document B, however some design teams and clients will insist on NCCT's throughout the building to provide continuity of detailing. External walls built with two skins of masonry which have adequate provision for cavity drainage and mortar droppings may not be required (in discussion with Project Design Team / Client and Warranty Provider etc) to use a NCCT and instead install a horizontal Non Combustible Damp Proof Course (NCDPC) above finished ground level as shown. 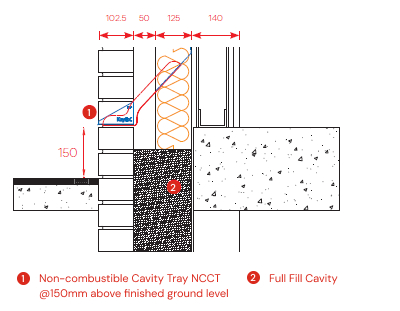 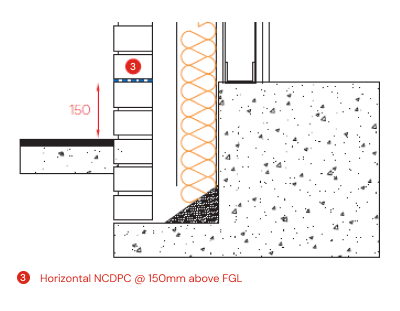 Non-combustible Cavity Trays are tested independently of the internal skin and any other membranes. It is good practice to overlap a strip of membrane, to protect the insulation etc from the elements during construction and in the event of any interstitial condensation forming within the cavity this can be drained out on top of the tray. The membrane should overlap the top of the tray by 100mm. At corners, the strip of membrane should be overlapped and taped as per manufacturer’s technical guidance. 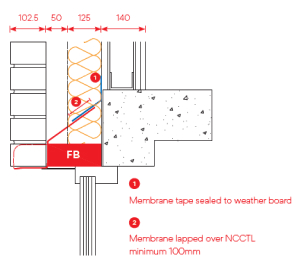 Why is it preferable to avoid use of tapes, sealants and mastics when creating joints in Cavity Trays?

Conditions caused by dust, moisture and temperature are commonly known to adversely impact the performance of tapes, sealants and mastics and therefore the joints formed using them.

Additionally, the integrity of a joint formed using tapes, sealants and mastics cannot be easily checked on site in a non-destructive manner.

The Keyfix ribbed overlapping joints allow for moisture proof joints to be formed without tapes or sealants, whilst also accommodating horizontal movement and allowing for non-destructive quality checking by onsite QC inspectors.

Can a Cavity Tray be cut onsite?

On site cutting and fabrication of Cavity Trays should be avoided at all costs. Fabrication, cutting and folding not carried out by the manufacturer can give rise to warranty disputes. All onsite alterations or fabrications should be signed off by the relevant Warranty Provider and / or the system Manufacturer. If a Cavity Tray clashes with another building component within the cavity (such as a wall tie or wind post), the Cavity Tray may be notched or cut around it, providing approval from the manufacturer has been agreed, and only where the cut / notch does not occur within the nominal 50mm clear cavity.

All cuts should be sealed around using an approved proprietary system. 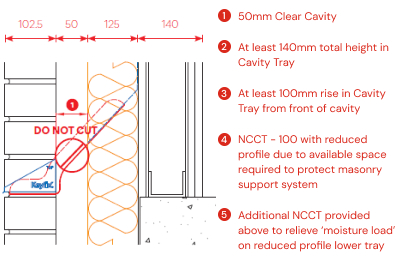 If the space within the cavity does not allow for a standard Cavity Tray profile, can the profile be reduced?

Cavity Trays must conform to predetermined dimensions as shown below in order to perform correctly.

However where the available space within a cavity is restricted due to other components, it may be necessary to reduce the NCCT profile in order to provide protection where it is required. Reducing the NCCT profile below the recommended dimensions will reduce its effectiveness. Consideration must be given to the area of masonry above the tray through which wind driven rain may penetrate.

Where water ingress is considered to be a risk, an additional tray should be installed above to ‘relieve’ the reduced tray. 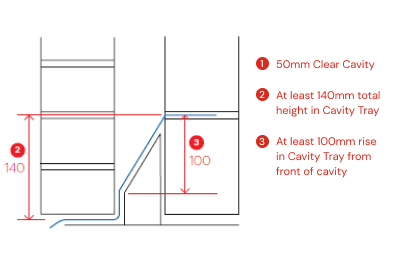 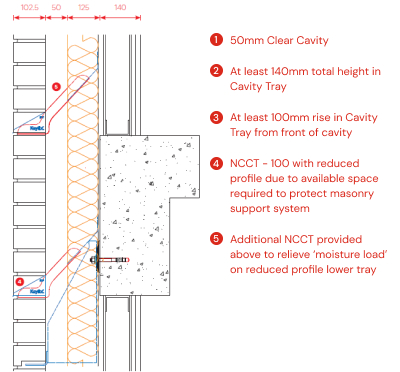 Why is it preferable to have an integral Stop End?

Proprietary Stop Ends can be adhered to the lintel or tray surface during installation, however this is not easily done and is difficult to supervise or inspect on site.

Site conditions can greatly affect the effectiveness of the adhesion. Cold, wet or dusty surfaces will reduce the quality of adhesion and accordingly the seal created when joining parts onsite.

Mechanically fixed / Integral Stop Ends are manufactured and assembled in a controlled environment and therefore guarantee a watertight joint, ensuring no moisture can escape off the surface of the tray or lintel unless via the intended weep vent.

Zinc Alloys can be a concern for some Warranty Providers in relation to corrosive attack from alkali in mortars.

How can wall tie distribution be achieved where Cavity Trays, fire barriers and masonry support are all present together?

Where a Cavity Tray fouls the provision of a wall tie or fixing within the notional 300mm of a masonry support angle or lintel, ties can be installed in courses below the Cavity Tray (fixed to MS brackets or slab edge), with subsequent ties then placed 300mm above this.

Increasing the quantity of wall ties is also good practice. 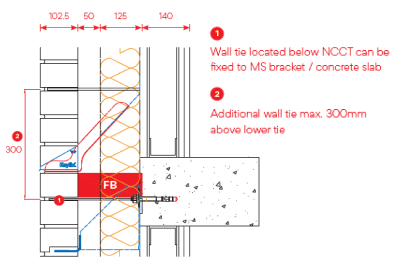 Where is a Cavity Tray positioned when masonry support angle is inverted and positioned at finished floor level? 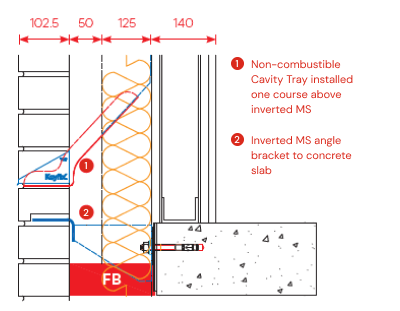 How are window/door reveals detailed?

Where window / door frames are recessed greater than 102.5mm and the NCCT starts and stops between openings, the trays must return around the brickwork reveal with an integral Stop End in line with masonry / frame jamb. 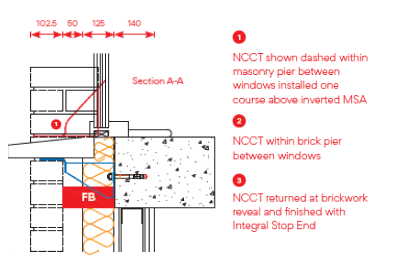 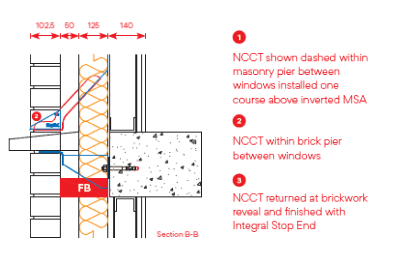 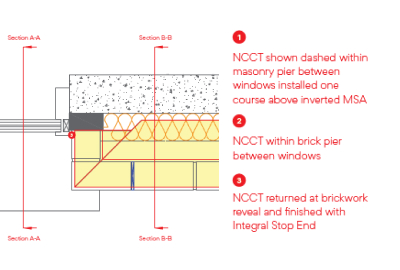 We invite you to make contact with our technical design team to collaborate or enquire about a project.

Keyfix Non-combustible Cavity Tray is BBA Certified, NHBC Accepted and is approved by Premier Guarantee and LABC following their comprehensive review of innovative products and systems.

Going Above and Beyond

This website uses cookies to improve your experience while you navigate through the website. Out of these cookies, the cookies that are categorized as necessary are stored on your browser as they are essential for the working of basic functionalities of the website. We also use third-party cookies that help us analyze and understand how you use this website. These cookies will be stored in your browser only with your consent. You also have the option to opt-out of these cookies. But opting out of some of these cookies may have an effect on your browsing experience.
Necessary Always Enabled
Necessary cookies are absolutely essential for the website to function properly. These cookies ensure basic functionalities and security features of the website, anonymously.
Functional
Functional cookies help to perform certain functionalities like sharing the content of the website on social media platforms, collect feedbacks, and other third-party features.
Performance
Performance cookies are used to understand and analyze the key performance indexes of the website which helps in delivering a better user experience for the visitors.
Analytics
Analytical cookies are used to understand how visitors interact with the website. These cookies help provide information on metrics the number of visitors, bounce rate, traffic source, etc.
Advertisement
Advertisement cookies are used to provide visitors with relevant ads and marketing campaigns. These cookies track visitors across websites and collect information to provide customized ads.
Others
Other uncategorized cookies are those that are being analyzed and have not been classified into a category as yet.
Save & Accept